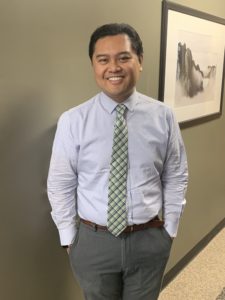 Dr. Adrian Salamanca earned his Bachelor of Arts in Psychology and Linguistics from the University of California, Irvine and his Doctorate of Optometry degree at Pacific University in Oregon. Dr. Salamanca received training in ocular pathologies during his externships at two Veterans Affairs hospitals in Fresno, CA and Salem, OR, and at an Indian Health service in Bethel, AK. In addition, he has further training in contact lenses during his externships at the Naval Medical Center in San Diego and the clinics of Pacific University College of Optometry. He has participated in multiple eye care missions that provided comprehensive eye exams to underserved populations in Honduras, Costa Rica, El Salvador, and Thailand.

Prior to moving to Seattle, Dr. Salamanca practiced in San Diego, CA. He is a current member of the American Optometric Association and Optometric Physicians of Washington.

“You already do all the things I think are needed and have a very professional staff who is warm and welcoming.”

You can schedule your next appointment with us online!

Leave Us a Review

Please take a moment and let us know how your experience was.

Let's continue the conversation over on your social network of choice.